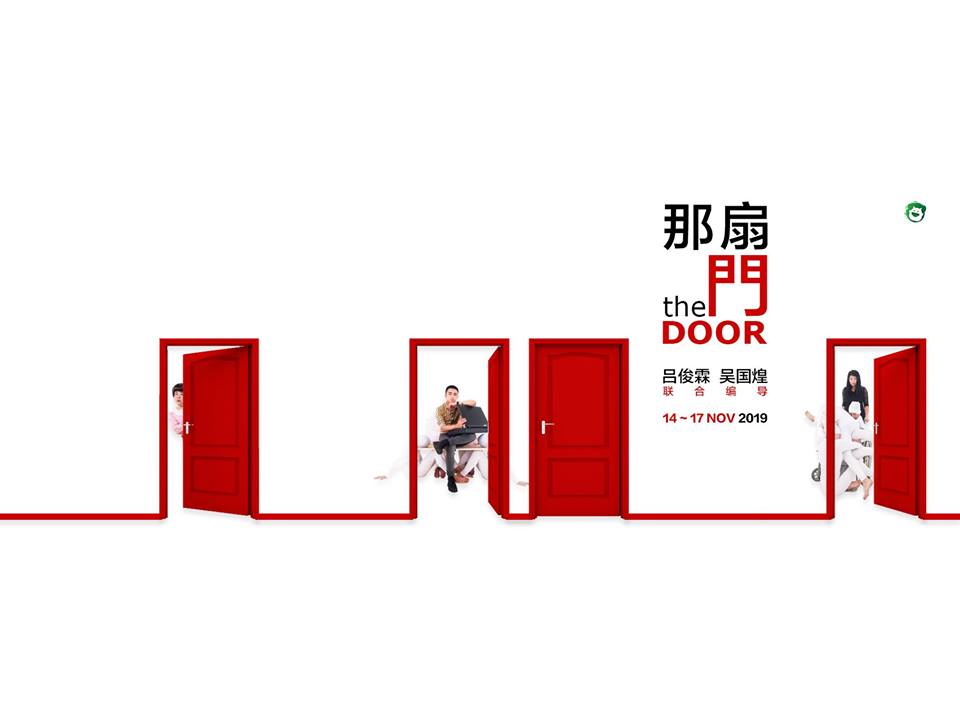 *LIMITED SEAT for each session.

“眼前就是一扇又一扇的门。
有可见的也有见不着的，或只有自己见得着的。”
‘Seeing doors after doors before me,
some of these were unveiled and some were concealed,
perhaps there were a few for my eyes only.’
.
.
.
四个故事组成的一部戏剧演出，每个故事都和‘門’有关。
A theatre performance with FOUR stories about doors, waiting to be opened.
.
.
.
《那扇門 The Door 之 丹尼尔·程 Daniel Chen》
Daniel Chen，一个28岁青年，是化妆品柜台副销售经理。自13岁母亲病逝之后，他没有再打开过这扇门……
A 28-year-old young man working as an assistant sales manager at a cosmetics counter.
— His mother passed away when he was 13. He had not opened the door ever since.

Daniel的父亲进院，Daniel被姐姐要求回家收拾父亲的衣物和日常用品。Daniel只想快速地完成任务，然后快点离开这房间。怎知他打开衣橱时，却有一堆杂物从衣橱倒下……
Daniel returned home, at the instruction of his sister, to pack a bag for his father who is now hospitalised. He opens the door to his father’s room and is overwhelmed by the pungency of medicinal massage oil. He reacted by dousing the air with perfume he carries in his bag and tries to spray away the odour. His father’s slightly disorganised room repulsed him and he wanted to spend as little time as possible there. Only a bag needed to be packed. Upon opening the closet, random things fell in front of him. He was suddenly filled with an urge to throw them away like his sister had. As he moved them to the bin, memories emerged……
.
.
.
《那扇門 The Door 之 林爱莉校长Principal Lim Ai Lee》
林爱莉，一个刚退休的中学校长。在外，她是让人敬畏的……
A recently retired principal of a secondary school .
— To anyone else, she is admirable…

她的先生在两年前中风，脑部严重受损，饮食起居都需要特别看护和照顾。学生主席送一起出席宴会的她和先生回到了家，一关上门，林校长有些累得躺在了沙发上。在脱下高跟鞋的时候，才想起看护请了3天的假，她看了看她的先生……
Madam Lim Ai Lee’s husband had a stroke two years ago and his brain function was severely affected. He now needs round the clock supervision and medical care.
After chaperoning prom, the president of the student council sent them home. As the door shuts, she sank into the sofa. Just as she took off her heels, she suddenly recalled that the nurse had taken a 3-day leave.
She then rose from the sofa and began tidying the house. She had to give her ill-stricken husband a wash before bed. She looked at him then put on a CD of her favourite tenor. With much effort, she moved her husband into the bathroom. She carried him and sat him down on the chair to wash him. She stripped him to wipe his body clean then she summoned all her strength to…
.
.
.
《那扇門 The Door 之 Teresa》
Teresa，一个怀孕5个月的妈妈。
A mother who is 5 months pregnant.
— She doesn’t have the courage to step out of the door, she wouldn’t even dare run away from home…

她不敢出门，更不敢离开家里，每天除了安胎休息外就是准备好吃的食物给疼爱她的丈夫。她确实已经很久很久没离开过屋子，也很久很久没打开过那扇门了。这天，丈夫上班离开后，她决定做丈夫最喜欢吃的草莓蛋糕。开心的她忙了一整个早上，忽然才想起，家里已经没有了草莓，就在这时候，门外竟然有水果摊贩经过。她开始忐忑不安……
Teresa is an expecting mother in her 2nd trimester. Her daily chores was to ensure she carries the baby well, and to prepare food for her husband who loves her very much. She is a prisoner in her home because of her agoraphobia. Her husband would have to buy everything and bring them home. For a very long time, she has not left her home, and not open the front door….
After her husband leaves for work, she decides to bake a strawberry cake for him. Baking the cake gave her a lot of joy and the house was filled with the sweet smell coming from the oven. Suddenly, she discovered that there were no more strawberries at home. At the same time, the fruit vendor was passing by, and had some juicy strawberries in the cart. She started feeling uneasy, as she was struggling to leave the house, but was held back by her fear. At last, she thought of a replacement for the strawberries, but was rejected by the ‘cake’…
.
.
.
《那扇門 The Door 之 老人与小孩》
老人，充满智慧的；小孩，不怕老虎的。
A wise old man and a fearless child.
— You just need to open the door…

老人遇上了一个奇特的门，他总是无法顺利打开，可是小孩却都能轻易打开。老人决定好好研究这扇奇特的门，他研究了老半天，还是无法顺利打开，最终小孩还是轻易的打开了。这天，老人决定不再尝试，且等着小孩到来开启这扇门……
The old man stumbled upon a special door. No matter how hard he tried, he could not open it. The child, however, opened the door easily. The old man decided to inspect this special door in all corners, but he found no clues on how to open it. It was effortless for the child.
On this day, the old man had decided not to try, and he waited patiently for the child to open it…..