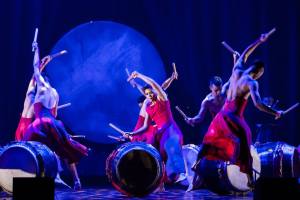 Percussion Paradise celebrated talent and history on the 30th September at the Plenary Hall, Kuala Lumpur Convention Centre ; as many came to watch HANDS Percussion’s 20th Anniversary: Percussion Paradise. As the doors open, a night of story-filled wonder  began.

A round of formalities kick-started the night, aided by the gracious charisma of MC, Adrian Seet.The opening focused upon the evolution of HANDS Percussion, centered around Bernard Goh’s story about starting his career anew, and diving into the Malaysian Performing Arts industry for over two decades. Not only has he and his team nurtured their unique showmanship of performing with percussion, but their overall philosophy evolved too. The performing arts groups began to raise awareness that ‘art can inspire change’, as quoted by Bernard Goh, “It has the capacity to capture a person’s attention first, then the potential to affect positive social change through music especially with children. Along with the opportunity to raise awareness of social and economic issues through our performances and community work, these are the reasons we still do what we do.” YAM Tunku Zain Al-‘Abidin ibni Tuanku Muhriz had also attended the showcase and shared his wishes and support for HANDS Percussion.

Full article on The Daily Seni